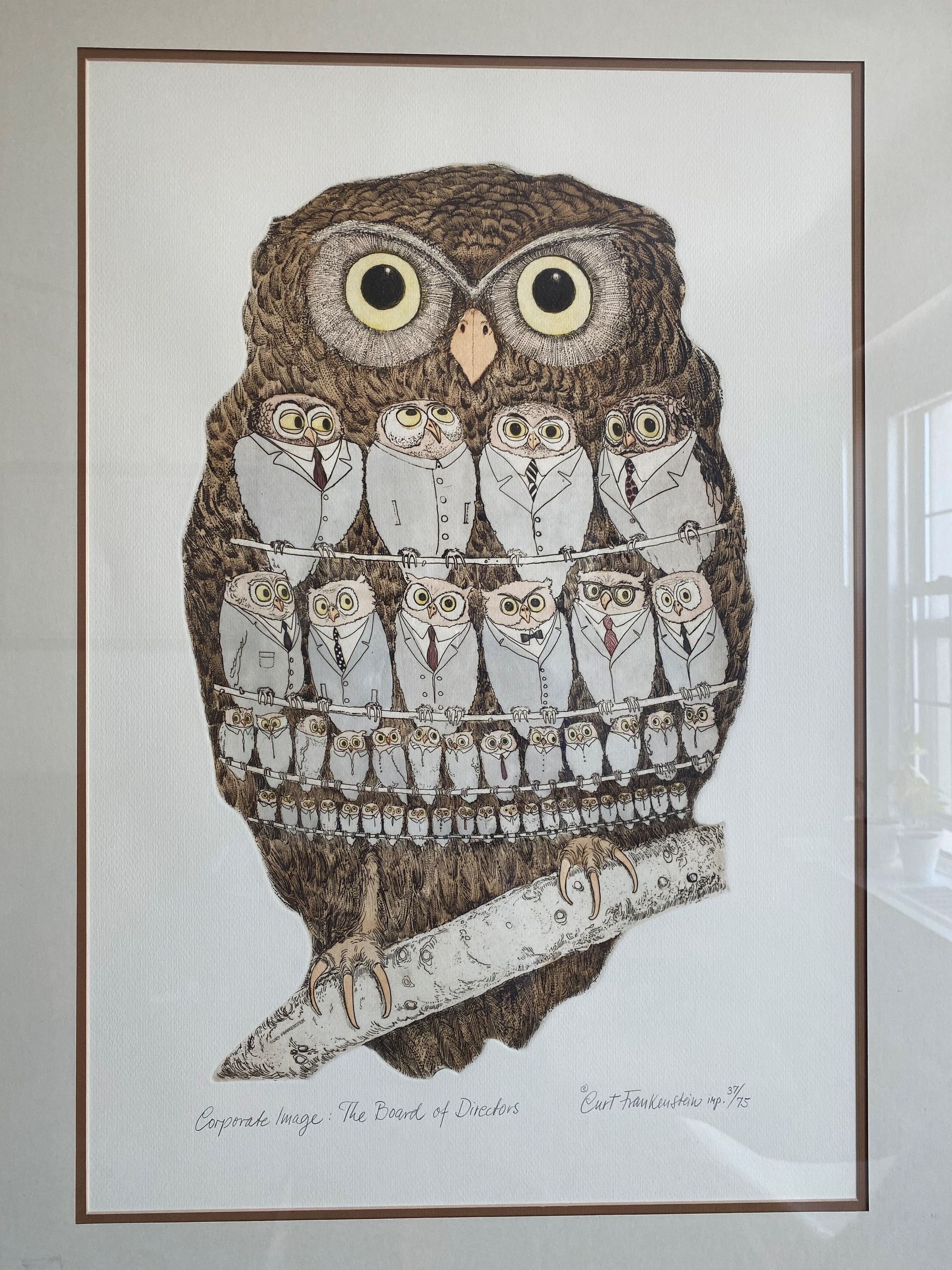 I have this delightful piece from an artist named Curt Frankenstein.

He creates, among other things, artwork with birds and animals in whimsical anthropomorphic settings. This specific piece, pictured above, is a signed print showing owls in an amusingly wonderful professional setting and is titled “Corporate Image: The Board of Directors”.

My ex-wife and estate sale extraordinaire Shannon sourced two of Frankenstein’s works at different sales in the Metro Detroit area. When we separated I kept the one you see above.

About a month ago I bought my first NFT. Most people were confused about this decision and the NFT space in general. So I thought I’d take the time to share my perspective on why on earth I bought an NFT and what my emerging opinions are on this space.

This is not an explainer on what NFTs are — there are a host of places on the internet where you can easily find in-depth explanations. I will share a couple of brief definitions though.

Blockchain — Very simply, a blockchain is a digital record of transactions, a lot like a ledger. Individual records, also called blocks, are linked together to form a chain. Bitcoin and Ethereum are two examples of these. Bitcoin is strongly making its case as digital gold. Ethereum, perhaps even more interesting, is a decentralized application platform enabling a worldwide computer of sorts and programmable financial applications.

NFT — This stands for non-fungible token. Each token represents an object or a unit of data on a blockchain. Unlike a currency like bitcoin, where one bitcoin is replaceable with another one, an NFT is non-interchangeable or non-fungible, hence the term. Each NFT is intended to act as a digital certificate of ownership for an asset, typically a digital asset. They have become especially popular over the past few months for representing digital art but could represent other things like songs, blog posts, books, objects in video games, or perhaps even a deed to a piece of physical property.

An underlying concept that makes NFTs work is that of smart contracts. Similar to an actual legal contract a smart contract has lines in it, lines of code that allow NFTs to do what they do.

Automated, permission-less, equitable distribution of profits from a sale are one possible example of what a smart contract could do.

Now back to our scheduled programming.

So, let’s say I decide, for some strange reason, to sell the beautiful Curt Frankenstein piece, and ended up making a healthy gain. What if there were an NFT associated with this piece of art? What NFTs and their underlying smart contracts could allow me to do, is enable mechanisms that in a permission-less manner split any gains from this resale between the participants in this value chain.

You might be able to do this today through a complicated web of legal agreements enforced by the artist’s estate and the subsequent owners of the piece. But it’s not hard to see how, especially for less well-known artists and small sums of money, this is an absolutely untenable proposition with the legal fees likely being an order of magnitude more than the art itself.

If out of the goodness of my heart, I wanted to compensate others in this value chain I’d have to (1) find the artist’s estate to give them a share of the proceeds and (2) do the same with Shannon and (3) potentially all other owners along the way if I wanted to truly reward everyone responsible for me gaining this value.

The first would be hard, the second easier because I know how to find Shannon but at the very least an inconvenience due to the manual nature of the transaction, and the third, well impossible given that there isn’t a record of all previous owners.

Perhaps rewarding every person in the value chain seems a little over the top but if you think about it a little more it adds a degree of equity that makes sense. I wouldn’t have known about this artist if Shannon had not found this piece and she wouldn’t have known about it if the specific estate in Detroit didn’t procure and then sell it as part of their estate sale.

NFTs could solve this problem. The blockchain, as I noted above, by definition, is a ledger that stores a history of all such transactions. You could see when this piece of art was created by the artist and every subsequent transaction or exchange involving it. The artist or anyone participating doesn’t have to exert any additional effort, hire attorneys, or interact with each other (unless they want to).

Smart contracts can also allow mechanisms where each member of the value chain sees a benefit if the price of the artwork appreciates over time. Some of what I am describing is still in their experimental stages but many aspects, including royalties to artists when a piece is re-sold, are already working at scale today in an automated, permission-less manner.

This brings us to the NFT I bought recently. It was created by a London-based designer named Tim West. He will likely gain a share of the proceeds if I sell this NFT for a profit at some point. The exact percentage is encoded into the smart contract and there is nothing either he nor I will need to do to enforce this. We’ll just see the digital currency in our wallets one day, no interaction or permission needed.

Back to Curt Frankenstein and the Corporate Image.

Let’s assume in my specific instance there were two past owners (O1 and O2) before Shannon (S) found the piece. Let's also that I sold this artwork with a gain of $1000.

The way it could work in theory is that the smart contract would encode that for each such sale 10% of the gain would make its way to the artist or their estate (CF), 1% to every prior owner and 8% to the last owner, since for me specifically, that last person was especially important in seeing the value I’m gaining. (I'm making these particular numbers and rules up but the point is that the smart contract would allow for some similar split.)

So in this instance, where the total gain from the re-sale was $1000, the artist would get $100, the prior owners $10 each, and Shannon $80. All of this would occur in an automated fashion without any of us needing to do anything or even know each other.

These numbers, over time, will add up, both for artists and creators but also for art collectors who own work for a period of time and then want to explore other work to free up their digital or physical wall space.

Think of it as an automated, permission-less mechanism for royalties and a digital finder's fee that no one has to work to enforce.

The consequences of this are non-trivial in terms of intellectual property, provenance, and of course compensation.

“The next big thing will start out looking like a toy.”

The quote above is from an essay written in 2010 by Chris Dixon that I keep coming back to and is a key premise for NFTs today. They feel like toys today but have a lot of promise that is only beginning to emerge.

Everything I’ve talked about here is in the context of a piece of art, but the same premise could perhaps work around others assets like property. As a piece of property appreciates over time the original owner who sold the property back in 2007 could continue to see a portion of the gains from a sale and a hot property market in 2021.

I recognize this is not an all-encompassing view and I’ve got slightly rose-tinted glasses on. I’m assuming appreciation here and no depreciation. There are many other considerations to explore including transaction (or “gas”) fees and environmental impacts today that need to be seriously considered.

I bought this trippy blockchain themed NFT created by Tim West because I loved it as a piece of art. It reminded me of the first simple animation I created when I was a computer science major — a 90s Windows screensaver like scene with a ball bouncing off different corners of the screen.

The elements of the beginning of a discovery, nostalgia, and aesthetic attractiveness were large factors in me wanting to own this. But I also bought it because I feel that while it's still early the mechanism of the NFT certainly has a lot of promise.