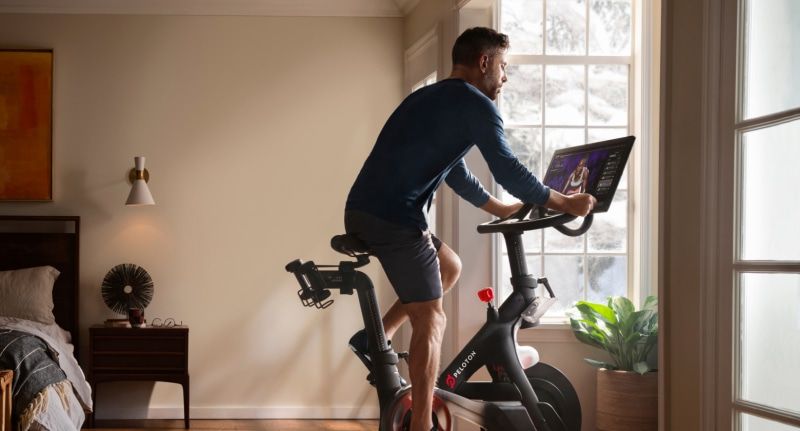 Storytelling and Peloton’s future opportunity in gaming and exclusive content.

Peloton is a company that has been part of the 2020 COVID-influenced tech zeitgeist. Like most others in this realm, the company is an example of a good product that has seen a growth spike much faster than most expected.

After spending a couple of months with my Peloton and observing the broader media landscape they participate in, here are three reflections on Peloton and how they have opportunities in the world of gaming and exclusive content.

1. We are still in Stage 1 of Peloton’s disruption journey. If you look at the image above from a recent Peloton investor report you’ll note that each row of disruption comprises a media category — movies, video games, music, and books. Fitness is the only row here that isn’t explicitly a media category.

With that said, I’m reminded of what media analyst Matthew Ball described in one of his excellent essays,

As most of the major media categories — music, video and video games — have existed for decades, we tend to forget that media is technology. Instead, we think of technology as being used to express media, rather than media itself. Spotify, for example, is an internet streaming music service, while iTunes is a download music service, SiriusXM is satellite broadcast music service, and radio is a terrestrial broadcast technology. This focus on delivery ignores the classic definition of media: “outlets or tools used to store and deliver information or data.”

If we reframe our view of Peloton (and some of its competitors) by this definition — an outlet or tool used to store and deliver information or data — fitness becomes a media category with devices like the Peloton Bike, Bike+, and Mirror as tools within this category of media.

The natural extension of this line of thought is to explore how far along the path of disruption Peloton truly is. The rationale in the subtext of the image above, I would argue, is relatively conservative.

Disruption is being defined here as just rendering “brick and mortar locations inferior”. While that is true, I would argue that is just stage 1 of the disruption journey. If Peloton’s play their cards right, this is akin to Netflix in the early 2000s when they disrupted Blockbuster’s brick and mortar model, not Netflix today when they are competing with Disney Plus in the exclusive content space of the attention economy.

Spotify provides us with a similar analogy. They have moved beyond just competing and disrupting how music is delivered by “independent record and CD stores” to broader means of storytelling with forays into podcasting, partnering with creators like Rogan and Brené Brown and large brands like DC in the comic space.

While fitness will continue to be Peloton’s primary focus the ways they can build on their strengths will mean that they could and should be able to do more than just disrupt brick and mortar gyms.

2. Peloton and storytelling — In a past piece on Spotify, I talked about how we often think of platforms in binary ways, rather than mechanisms that allow people to tell stories, directly or indirectly.

Peloton has made its entry into the space of storytelling, its journey expedited by the forces of COVID-19. Each one of their instructors like Emma Lovewell, Alex Toussaint, and Ally Love tells us a little bit about their story in every class, encouraging us to shape our own story, and welcoming us (often sternly) into the family.

While all of this has proven to be incredibly effective, it is still a lift and shift of the fitness class experience into our homes.

The experience is convenient, compelling, and supported by a sexy piece of hardware, and well, attractive instructors, yes, but still a replica of something you could get, at least pre-COVID, at a gym or boutique fitness facility.

Peloton has the unique opportunity to build on this with unique, exclusive, content. Specifically, I’m thinking about how Peloton can make limited, strategic forays into the first row of media categories in the chart from the investor presentation — Movies. Even more specifically, short movies or shows.

My first ride on a Peloton was attempting one of their scenic rides. These are rides without instructors where you ride at your own pace while watching different geographic scenes unfold in front of you. It was a Saturday night and I wasn’t quite ready to start with a whole lot of exertion. I was riding through trails in Argentina. A hiking trail, slowly climbing a mountain, passing by hikers, eventually overlooking a beautiful vista. What if rides like this could be replicated but with a narrative around them?

I wondered what a Peloton ride might look like while navigating the streets of Paris with some Yann Tiersen like music playing in the background. Yes, I’m definitely thinking of the scene from Amelie but I bring up Paris and Amelie for a reason.

Let’s suspend our disbelief for a few minutes as we do when we are enjoying most works of fiction. Imagine a ride, where you are biking (or in the case of the Peloton Trek jogging) through a scenic or storied locale. Now imagine you’re not just watching a video that someone else has shot but are a part of the fictional narrative you are seeing unfold in front of you.

There are two immediately applicable versions of this. (I’m sticking with two in order to convey my direction without making this overly complicated).

Key new features [of the Bike+] include a 24” rotating HD touchscreen, a high-fidelity four-speaker sound system, and Auto-Follow, a feature that automatically scales your resistance based on the instructor’s target metrics.

Imagine an intense scene unfolding on the streets of Paris or a strenuous (virtual) climb up the Andes resulting in your resistance ratcheting up. As the tension of the scene (or the slope of the climb) loosens you get a chance to catch your breath.

Producing content of this nature, especially if we go down the path of a Peloton themed movie or TV show is not an inexpensive endeavor. Netflix spends billions of dollars on this, albeit that is core to their strategy.

That being said, as Peloton moves along their self-stated goal of going from 3M subscribers to 100M they will need to think about how they cater to different parts of the attention economy, and exclusive content can be one of the pillars of growth and an avenue to bring in new consumers. While instructors and the engagement they bring are always going to be core to Peloton’s mission, they may not, after a period of time truly distinguish them from brick and mortar establishments and beyond.

3. Peloton and gaming — By this point, you already see where I am going. If we look back at the first chart, I’ve hit on movies and Peloton’s storytelling opportunity in that space. Music is an area where Peloton is actively participating, both in terms of how it’s a core part of every instructor’s schtick and workout, but also in terms of partnerships with artists like Beyoncé. While audiobooks and podcasts are part of some of our workout routines, I’ll leave that out of the dialogue for this point.

What that leaves us with are video games. Gamification is already a huge part of Peloton’s draw. The sense of competition, largely with yourself, but also with the broader leader board, the high fives, rides with friends and such are components of this. What’s missing, at least for now, is a true video game and fitness combination. There are multiple developers who have hacked ways to do this either by creating custom games or linking the Peloton to Xbox games.

Source: Cezar Babin on Medium. A basic, hacked demo of what gaming could look like on Peloton.

It doesn’t take a great degree of imagination to picture a game involving you riding a bike, with levels, timed intervals, and challenges. Forecast perhaps a few years into the future and you could imagine a virtual reality addition to this experience, opening up another host of possibilities. The time to start the move into this space is the present.

Peloton’s target demographic at least pre-COVID was 35 to 65-year-olds which means older millennials and beyond. If you look, however, at Gen Z, you see how much video games are a part of this demographic. How much of this can Peloton somewhat organically break into overtime by either creating unique video game-type content or partnering with other game studios? Peloton’s competitors in this part of the attention economy are the likes of Apple and Facebook’s Oculus who are aggressively focusing on fitness.

Given the trajectory of how the gaming ecosystem is going to play not only in traditional video games and mobile devices but also in the future rollout of autonomous vehicles, it’s not hard to imagine a time when Peloton seriously considers how they incorporate this into this content strategy and expansion approach.

Storytelling is going to continue to be a part of Peloton’s future — it’s just a matter of the ways they decide to participate.